After purchasing my 2008 Ram 3500, one of the first things I did was to I install the K&N cold air intake system. K&N guarantees their aftermarket products (non-OEM) will not harm engines and invalidate the manufacturer's warranty.

Several months later I began to read a lot of information on the Internet indicating the K&N oiled air filter passes too many particles. Although I properly maintained the oiled filter, after 3 years and 71K miles, I decided to remove my K&N system October 2012 and reinstalled the OEM system. As far as the performance advantages of the K&N, the removal was a major mistake. I noticed right away there was less power. A day later, for the first time I had to drop to second gear going up a hill I've been up several times with my rig on my way to an RV Park. I've always gone up that hill in 3rd gear at 3000 RPM going 50 MPH. I approached the hill as usual and watched the speed go down and down. When I got to 34 MPH, I dropped it to second gear and began to gain speed.

Now what? Do I put the K&N back on? Or do I look for a different system? Will I be able to find a better filter that replaces the K&N filter?

I began to research for a different filter and/or system. I discovered that AEM has cold air intakes and several sizes of replacement dry filters. A quick call to AEM confirmed the size I needed. The cleanable AEM dry filters do not require periodic re-oiling like the K&N Filters. The AEM dry filters are rated excellent in filtration (99+%) and I probably will never have to replace it. 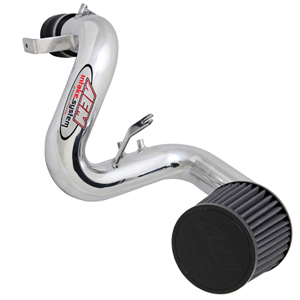 A few days later I drove the 6 hour round trip in my smart Fortwo to retrieve my K&N cold air intake. I reinstalled it and installed the new AEM dry filter and the AEM prefilter I purchased from Amazon.com. A few days later I towed my RV 155 miles to a new location. There is absolutely no doubt that an aftermarket cold air intake system will improve the truck performance. Not only did I get the lost power back, I confirmed that fuel mileage improved as well. My mileage improved from 7.8 MPG to 9.7 MPG (according to the on-board system). Going up hills returned to the performance I was used to.

During my trek to Goshen, IN and on fairly level roads with no headwind, the fuel mileage is reached 13 MPG and averaged 10.5 MPG while towing 19,600 pounds.

I recommend installing an aftermarket cold air intake system. And of course, I recommend AEM dry air filters. Especially if you don’t want to bother with cleaning and re-oiling the K&N air filter. If you want to replace the oiled air filter or your OEM air filter, AEM has a replacement for you.

In addition to the cold air intake, I have since installed an intercooler tube and use the Smarty Jr. The performance should equal or exceed the Ram 2012.

After picking up my Cyclone from a repair shop, I took it on a test run at some familiar areas I've towed before. The Smarty Jr towing program performed very well. In the past on two of the steep grades, my gear had to be in third to maintain 50 MPH uphill. This time, only forth gear was needed. I'm very please with the performance mods. BTW: I was towing 17, 420 pounds.

Completed a three week trip from Santa Barbara County, CA, to Las Vegas, NV, Bakersfield, CA, Jackson, CA, Sonora, CA, Morgan Hill, CA and then back home. The overall performance continues to impress me. I usually set the cruise control speed to 58 MPH (1500 RPM). In most cases, going up hill, the engine rarely down shifted. When it did, the increased power would quickly bring the speed back to 57-58 MPH. Eventually, I want to have my truck tested with a dynamometer. At some point, I may beef up the transmission and the differential, but so far, they have worked well.